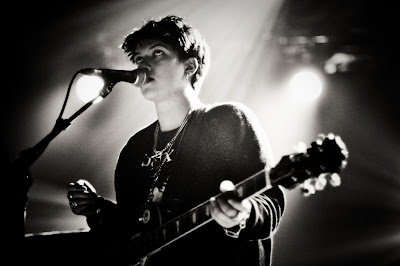 I use the word new with some hesitation. Nothing makes me feel more behind the times than the music scene. I'm aware of the fact that the youngest, coolest people will blow their bangs up in the air (apparently my vision of young, cool people was formed in 1988 and will never change) and sigh, "Whatever. I've been into the xx since I saw them at [insert hipster name]'s party in [insert London neighbourhood I've never heard of] ages ago."

I admit it. I'm a little envious of those people. Part of me really wants to be a music nerd, but I've only ever been able to peer in from the outside. I stand at the edge of the circle and rock back and forth on my heels, nodding in fake recognition when the cute girls and boys in glasses and tight pants name check obscure Norwegian pop bands from the 60s that were "so influential." This is why I love the Internet: I can now run home (...I want a smartphone) and look up whatever random band (movie, asian snack food) was being discussed.

I read something (somewhere) recently about bands someone (somewhere) saw at Coachella. They gushed a little bit about the xx, and I was intrigued. Often I'm disappointed when I look up bands other people gush about, but within half a second I was hooked, and I've been listening to nothing else since. (This is the song I started with, and I love this video.) I don't usually love boy-girl back and forth vocals, but I like the way these slightly smoky, subdued voices weave in and out. Minimalist with driving rhythms and good hooks. A little bit moody, but not despairing. Not so much pretty, but gorgeous. Love.
Posted by Ange Friesen at 11:52 PM 4 comments:

Email ThisBlogThis!Share to TwitterShare to FacebookShare to Pinterest
Labels: Music 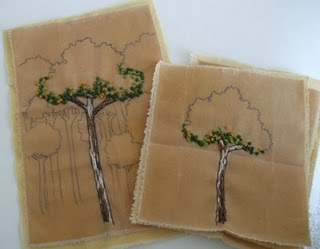 I am a little bit in love with Hillary Webb's art. Hillary is one of the many (many) creative, lovely librarians-to-be I've met during my studies, and I've been wanting to share her work since the first time I saw it. I've always liked embroidery (my past is littered with unfinished cross-stitch kits), but Hillary's work takes it to a different level. I'm a little fuzzy on the details, but she hand dyes her materials with dyes made of nature (nature! things like marigold, dahlia, black walnut, cochineal and umbilicaria, according to her website). The idea of her collecting little bits of world fills me with this fleeting storybook feeling that I can't exactly pin down, but it's rich and deep and a bit spangly. She then fashions her materials into these lovely studies of shape and colour. Love, Me Boutique in Halifax has recently started carrying Hillary's work, and I'm sure there are other avenues by which it could be purchased, if that's your deal.

I love librarians. And art. And colour. And nature.
Posted by Ange Friesen at 12:36 PM 2 comments: 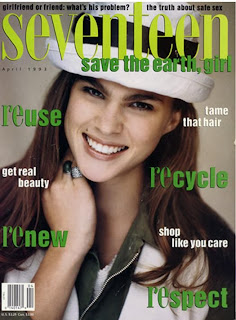 I just remembered my dream from last night (boring I know, wait up). One of my favourite things to do when I was a teenager was to sit in bed with a giant stack of magazines I had already read before and go through them. I would do this over and over again, for hours at a time.

Last night, in my dream, this was what I did. I remember dreamthinking, it would be amazing to have a blog all about old teen magazines. Surprisingly, awake me also thinks this would be a great idea. This was probably inspired by Jezebel recent revisiting Sassy's Dopey Fashion Poses, and I am currently very sad that I dumped (hopefully in an eco-friendly way, as I would have learned from this April 1993 issue) my piles and piles and piles of Seventeen (and Sassy, and YM, and... those were the main ones. Mostly Seventeen and Sassy.). Anyway, I would so love to go through them again. That would be a great day.

Maybe rereading blog posts would give me that same feeling. Probably not.
Posted by Ange Friesen at 10:33 AM 1 comment:

Email ThisBlogThis!Share to TwitterShare to FacebookShare to Pinterest
Labels: Culture 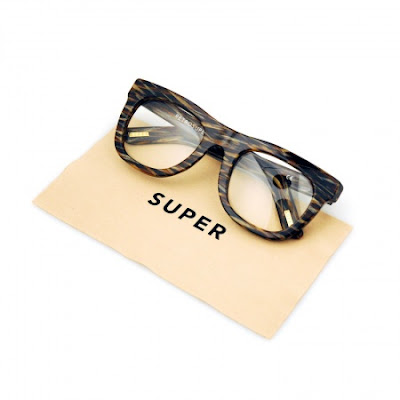 I am thisclose to finished my degree. Yeah, that one that I moved to Halifax for almost two years ago.

So I am almost officially a librarian. I don't have a job lined up, per se, but I think librarian is a title like doctor or artist - now that I am one I will be one forever, no matter what my job title actually is.

Speaking of job titles, I'm looking for a job. And as a part of Job Search 2010 I'm thinking I should develop some kind of official, portfolio-esque web presence. I just want to build a pretty simple space online, a my name here kind of thing, where I can showcase some of my talents (of which there are many, and metadata is just one of them), but I'm lacking in an awareness of how exactly to go about doing that. I understand how to get my own domain name. And I know some html, css, etc. But I don't know how to combine the two to end up with an actual space online. I was looking briefly at just using wordpress.com to build a page, but I quickly got frustrated by the fact that I would have to pay more to make any changes to the css, and I wasn't in love with any of the themes as they stood. Plus I'm actually really picky about design, so I'd like to have a little more control/develop something that's a bit more my own. So, if anyone has tips on how to go about getting started, please send them my way. Thank you. I love you.


Also: the closer I get to being a librarian the more drawn I am to classic nerd glasses. The need is almost physical, at this point.
Posted by Ange Friesen at 8:47 PM 4 comments:

This is the best thing I've seen in days (edit: weeks). Also, ever since seeing A Single Man I've been wanting to dress like it's 1962 every day. This didn't help.
Posted by Ange Friesen at 4:39 PM 3 comments: